We're almost to the end of May and it's my first new post.  I had thought I would get more posting done but that's not been the case. Work has been busy even though we lost a major part of our business. The restructuring we did to meet the new requirements of the customers has made the job much more labor intensive with no major financial gain, still we're lucky to have work at all and have avoided getting sick. I've been preparing for a twenty three mile one day hike so what free time I get has seen me off into the woods.

Others blog posts have been occupying much of my reading and providing inspiration and thoughts. A recent one by Jonathan Freitag  over on  Palouse Wargaming Journal was very good. Generally after reading most blogs I would search catalogs or rules sets this one had me got to the recipe index and make some burli, a favorite bread of mine when working in Switzerland. 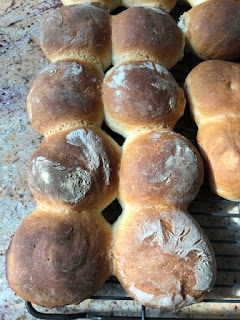 My wife was happy with them though I think I let the starter age a little longer next time.

Another blog post I was impressed by was this one by Michael T. Murphy He actually counted all his unpainted figures, detailed by period/genre. I get a headache just thinking about doing that.

I have done some painting finally finishing off a few Empress Vietnam figures.

So there it is. Seven weeks of work, fun and inspiration.
Posted by Dan Foley at 10:38 PM 8 comments:

I saw this on the Web an thought it was a great idea so down to the basement I went. (Actually it took a few days to it.) Here's the inspiring post from Toy Soldiers "Made In Germany" on Facebook.

Working on Painting, photography and hiking.

Since gaming has been ruled out as an activity other hobby activities have been budgeted more time.

My non gaming photos have never come out well so I tried a few other things still not great but I think they're a little better. Last nights test shots. Still getting some shadows.


Here are a few GNW Figures I shot early one morning.

The hiking trails are a little more crowded but there's plenty of space for all.

All in all things are good. I'm lucky to have hobbies and a spouse who shares one and has some of her own :-).  Thanks to all who stopped by for a read there's so many great blogs out there I'm having trouble keeping up with them all.

Hobby life is moving along. Painting has slowed down as I was able to get an extra weekend in at work but we've had two good nights of gaming. I didn't get a lot of photos for either game so not a picture heavy post.

First off was a spy game set in 1500's. Howard's paper city creates the scene. The objective of the game was for my spy to drop some documents off and then escape the city. Howard as the Cardinal's Guard was to try and catch me. The Guards spent much of their time challenging stand up citizens and I was just able to make the drop before having almost the entire Guard force descend on me luckily I was able to escape in the confusion and outrun my pursuers.


Next we did a city fight using A Nobleman's War. Matt 2.0 and I were the Swiss who were attempting to destroy the Burgundian guns at the center of town. Jonathan and Howard were the Burgundians and their English mercenaries protecting the city. The Swiss entered the town piecemeal giving the English time to form up and cut down the unorganized Swiss. The Swiss were able to spike three of the guns and cart off one but loss half their force.


I managed to finish a few more Vietnam figures. Here's my attempt at using computer photos as back drops. I've since learned that the figures should be a little closer to the screen and a bit more light in front would help.

Off to a good start

We were able to get three games in this month. The first two were actually a continuation of the same battle. AGW set in the AWI. The King's men were a bit slow to advance but after taking some casualties were able to inflict enough damage on the Americans to force them off the fence however the were unable to bring them decisive defeat.


the third game was a play test of Cadre a modern skirmish rule set. Set in Vietnam with a USMC platoon pressuring a mixed NVA and local VC force.


Three great games. I was glad to be able to get the Vietnam figures I had just bought and painted on the table.

Here's some more AAR over on Matt's blog.