Another day in the garden.

There had been some rumors and gnashing of teeth that the local game store would be closing fortunately for the people who game there it hasn't happened and the plan is to keep the Brick & Mortar part of the business open. I understand that most of their business is online. I understand the challenges they face keeping the B&M part open. It can't be easy and I have tried to support them by purchasing supplies and things when I can. Lately they've increased Historicals so it's been easier to do this. The club that meets at the store seems to be good at supporting the store as well which only makes sense. The store staying open gives gamers a place to meet, keep terrain and play. The allocated table space may get smaller but Vets Night is still being held and this is good for us gamers.

All that brings us to last weeks game of Chainmail Bikini. Once again Howard broke out his Chinese garden. We each had a group of three heroes this time looking for treasure held in the garden as well as controlling six guards. This time we placed the guards on the opposite side from our heroes to make them more threatening. In all the photos I tried to get in close to show off Howard's well made table. 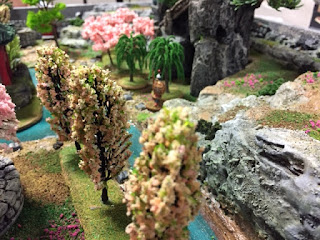 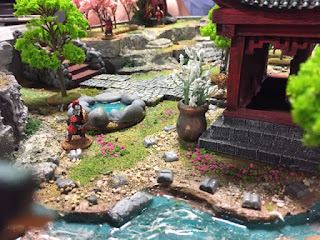 This month also saw a visit to NJCON. My schedule that day was a little tight but I was able to get down there for a few hours. First stop upon arriving  was the flea market. I had a few things to sell and wanted a look at what was available. Plenty of good deals could be found but I was able to keep my focus. Next stop was the vendor area. Lot's of temptation here. Next was the gaming area. I hit this in between sessions so not many games were being played. I did see a  Third World War Micro Armor, 28mm AWI, 28mm Viking Siege of Paris and set up for a few tournaments.

So in the end. I sold enough to cover the LOTR figures, WWII vehicles and Osprey book. In the dealer area I picked up some of the new Empress Vietnam US Marines. Very nice figures.
I was able to play a few turns of the AGW game before I had to leave.


June has proven to be a good gaming month but Women's World Cup will be cutting in to some of the hobby time.